Some of you probably already know, that I released the SCARM v. 1.0 Milestone version in the end of July 2017. Many users were happy to get the new version, but some were not, because there are changes in the licensing model and not all were aware of that. 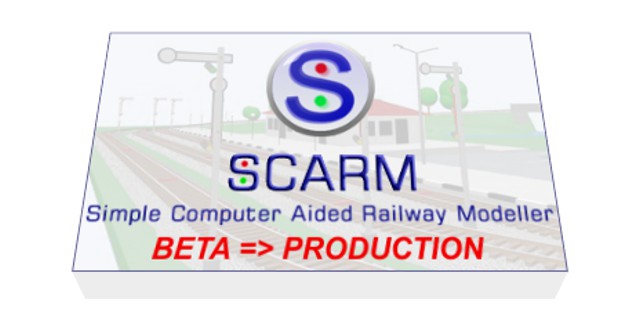 I am writing this post in order to try answering of all questions about the transition to the new version and to clarify the new way that I am taking with the development of SCARM for those who do not follow the posts in my blog.

Half an year ago, in the beginning of March 2017, I stated that SCARM 0.9.35 (RC1) will be one of the last beta versions of the program in the post SCARM v. 0.9.35 Released. At this time, I was already not sure if I will be able to continue to develop and share SCARM for free. The truth is that I was believing that more model train fans will support my work and will either donate or buy licenses for the Model Trains Simulator – Power Edition. But I was wrong.

In the months from March to July, after I saw that there was no increase in the donations (1-2 per month) and that just a few people are willing to pay for the MTS PE, I decided that SCARM should be turned into partially commercial project. So, in the beginning of July 2017, I announced the upcoming change in the post SCARM Approaches v.1.0 Milestone and explained why I need to do that.

In the end of July, I was ready with the first complete production release of SCARM and it was officially published. All details about it are described in the corresponding blog post SCARM v. 1.0 Milestone Released.

The releasing of SCARM 1.0 Milestone edition makes the previous beta versions of the program obsolete, so I announced the Phasing Out of The Old Beta Versions of SCARM. The old 0.9.x versions will stop working at some time (not all together) or will become unusable for creating of new layouts and I do not intend to prolong their lifecycle. But don’t worry, your project files are not lost at all. You can always open, review and print all layouts, created in the old beta versions using the new SCARM v.1.0 and that does not require pur­chas­ing of license key. However, if your track plan contains more than 100 tracks and/or objects in it and you wish to continue to edit and save it, you will need to get a license key for the new version. If you already donated or bought license for MTS PE, see how to obtain a free SCARM License Key below.

Now and the future

I am very thankful to all of you, who are using my software and especially to these, who helped me with information, catalogs, ideas, tests, corrections, translations and thoughts about my work. A special thanks to all, who shared their track plans and custom virtual objects designed in SCARM with all other users and fans of the program. And one more big THANK YOU to all, who have made donations to the SCARM project or have already purchased license for MTS Power Edition.

For all those, who already donated to SCARM project, bought MTS PE licenses and/or contributed with content and translations to the development of the program before the releasing of v. 1.0.0, I am offering free or discounted license keys for the new version as follows:

• All users who donated to SCARM project will receive FREE License Key for SCARM v.1.0 Milestone edition. Just send me a letter by e-mail to

and state the account (Paypal e-mail) from which you made the donation.

• All users who contributed to SCARM either with track systems info or major translations of the user interface and the documentation, will get a promo code for discount in order to purchase License Key for SCARM v.1.0 Milestone edition on a reduced price. Just send me a letter by e-mail to

and remind me when and how did you contributed to SCARM and I will then issue your promo code.

I assume, that some of you may be not happy or even frustrated that I am turning SCARM into partially commercial project, but that is the only way for me to continue to develop the program and to ensure the quality of the product and its support. I was working over the SCARM project and sharing it for free in the past 7 years and even now, it continues to be free for small and simple projects. But if you want to design bigger and/or complex layout with SCARM, please, support my work and pay the license fee – it is no more than the cost of one or two real turnouts in your preferred track system.

Thank you for your understanding.

52 thoughts on “Everything About The Transition to SCARM 1.0 Milestone”