This is the presentation of the N-scale Minitrix layout of Andreas from Germany. The track plan is L-shaped with overall dimensions of 2600mm x 1300mm (102″ x 51″) and is divided into 3 parts for easy transportation. It is very well designed and allows a lot of train running and shunting operations.

The whole track plan and several 3D scenes are shown below, followed by Andreas’ detailed description and possible operations.

The basic idea was to create an interesting and to some degree accurate to reality layout using a bunch of existing Minitrix tracks. The layout will be decorated in epoch III, representing a new double main line (which is in fact a long, single-tracked route with a fiddle yard below ground zero) and a branch with two terminus station on both ends.

The main line is used for presenting steam or diesel driven express trains driving through the east-west valley; there won’t even be a train stop there, because building an accurate platform takes too much room. With usage of the hidden train storage, up to four to six trains could be handled on the main line.

The branch track connects two dead end train stations at the very east and west ends, driving through the middle station. All three stations are capable of handling two trains at once, the two terminus stations can also be used to switch locos or even to change the loco back to the front. Using some sophisticated electrics or driving digital, up to five (short) trains can be handled on the branch track.

The main line is – for the visible part – a simple two track oval route with wide radii representing a modern express line. It’s passing through the whole valley, coming from and going into tunnels on both ends. In fact, underneath the surface there are turnarounds at both ends. At the west boundary, it’s quite easy (with two switches to enable additional modules in the far future). At the east boundary, it leads to an underground train storage with four parking tracks. There can be stored up to five trains (plus one or even two running above) to prevent having always the same train visible. Using IR photo sensors or sensor tracks and some simple electronics, trains may even be changed automatically through the parking tracks. The main track should be long enough to start the next train when the previous one is leaving the western tunnel turnaround without crashes.

Looking east to west along the double-track main line

Looking opposite (west to east) along the double-track main line

The western turnaround underneath the west station, including two switches for future junction to new modules

The fiddle yard underneath the east/front station above

The single-track branch line uses a lot of radius 1 tracks and is therefore not suitable for long carriages – which do not make that much sense on a minor track anyway.

The track connects the two “mountain-based” stations with the middle station in the valley; the western one has an additional service yard with turntable (Fleischmann, also existing material) for steam and diesel engines.

Because of the dead end stations there won’t be that much automatic operations: each train has to drive from one station to the middle station, probably waiting for another one coming the other way down, then going up the final station. There, the loco must be switched to the other end of the train to go back. So a lot of fun with shunting back and forth is expected. It’s even possible (and recommended) to use a different controller for each station, so one person can handle the western, one the eastern station on his own, being responsible for incoming trains, switching locos, etc. Both stations are prepared to handle both passenger and cargo trains. The western station may be connected to a future module, changing the dead end station to a middle station, so both the mainline (underground) and the minor track (above) can be continued on additional modules. This could be even two tracked, so the current western station would be the end of another double tracked line and lead into the current single tracked minor line. 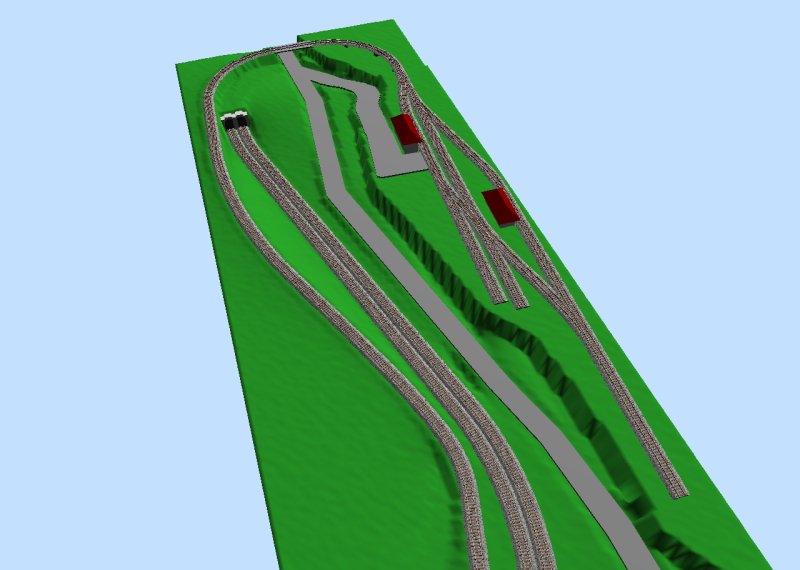 The eastern terminus station above the hidden fiddle yard on main line with two platform tracks and an additional cargo track. 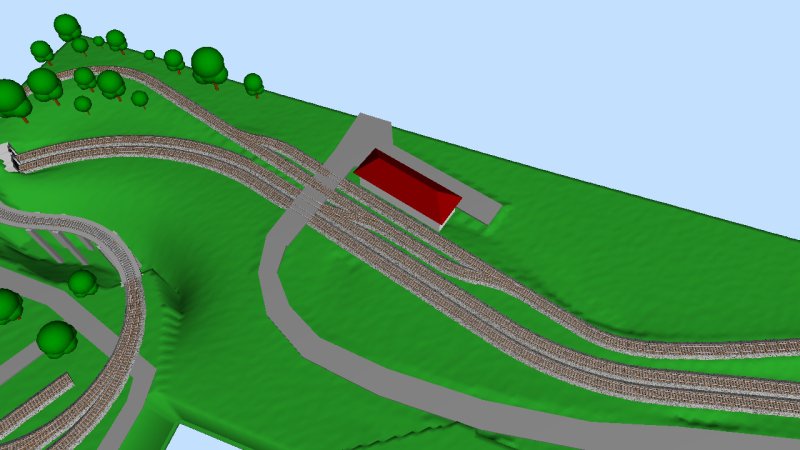 The middle station with two tracks only, mainly for overtaking or meeting the incoming train from the opposite direction 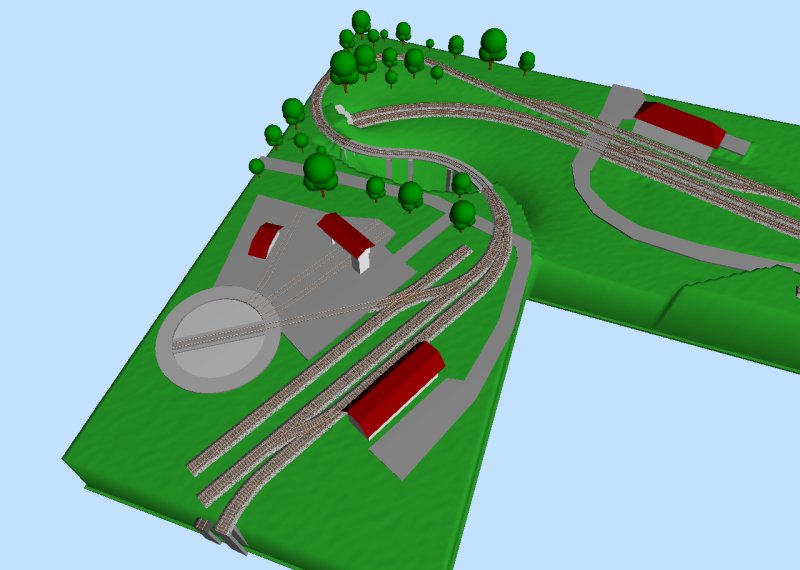 The western station with service yard in the back, with the option for a link to a future module

The layout can be changed easily with only minor modifications to different scenarios:

a) Using the branch track as a small (narrow) gauge track, representing some industry railway (e.g. cargo port), and the middle station becomes the transfer site between small gauge and main track.

b) Using the branch track as a mining railway, not descending it to the level of the main track, but keeping it above and using it to dump coal or ore from the mines at both ends down into cargo coaches on the main line.

c) Extending the layout (if there is enough available space) with making the middle module wider for a full-featured central station with platforms, cargo area with goods yard, depot, etc.

Thank you, Andreas, for sharing your layout idea with all other model train fans and SCARM users