This is a presentation of the N-scale (1:160) track plan, created by Bill “Sarge” Myrick with SCARM, which he sent to me by e-mail. It is about 17′ x 2.5′ layout with 5″ of elevation for the highest tracks and consists of single long main line with four-track train station and several other branches for freight yards, industries, depots, port and additional modules. The layout allows running of both passenger and freight trains and also many shunting operations.

The whole track plan and the 3D views are shown below, following by explanations of Sarge’s idea. 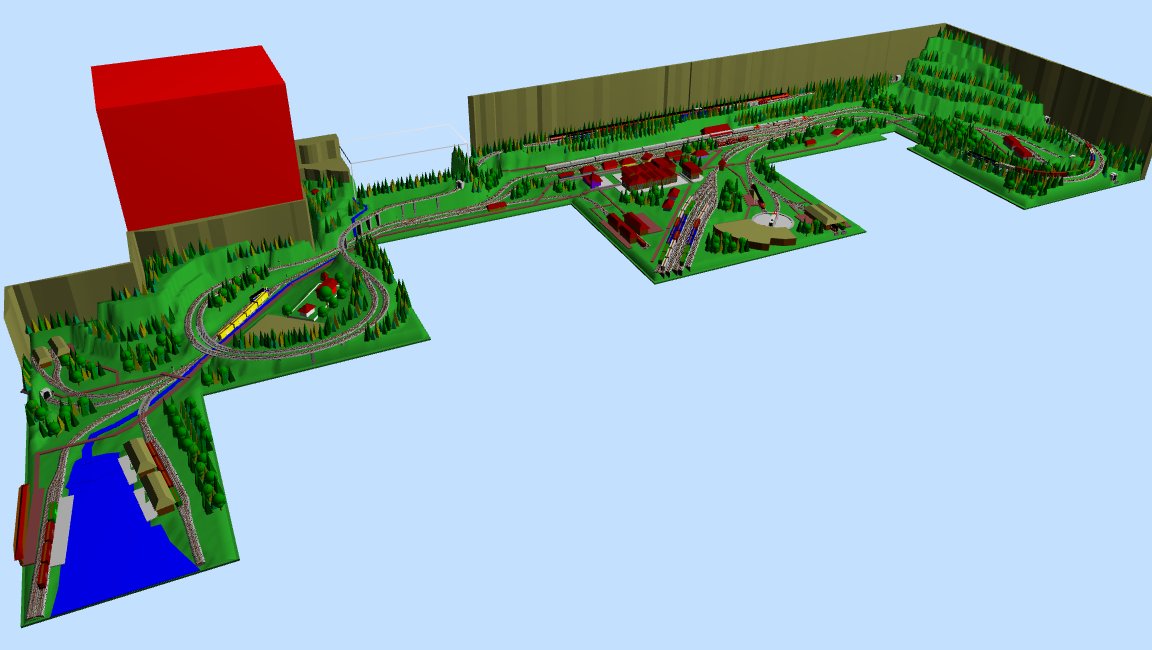 Here’s what Bill says about running of the trains:

“The main line runs from the center at about 1″ above zero, out to a climbing over and under loop on one end and a climb around and up hill through a tunnel at the other end to about 5″ above zero. Again, SCARM’s track planning with the elevations and grade helped make sure the train would clear under the loop, and make the climb properly. It would have taken days to try and plan that on just graph paper. Using SCARM’s track lengths allowed me to calculate it would take about 2-2.5 minutes to travel the entire main loop at scale speed (D=r x t or Distance = Rate x Time). A little math and knowing that at scale an N-scale train travels 2ft in about 4.25 seconds at 50mph. A couple of sidings for trains passing each other in opposite directions or passenger trains to pass slower freights.”

“On the layout there will be a lumber mill in the lower right end, some type of quarry/freight/mine in the upper left next to my automotive tool box (no other place to keep it in the garage – big red box in upper left corner). Some kind of industry, to the left of the freight yard, and some kind of port/docks, lower left corner. Off the left side of the layout will be my access to my workbench and the tool box. Otherwise this would have been about 20′ long.”

“Freight traffic will travel from the lumber mill, industry or the mine, out onto the main line, around the loops, and then to the port via the local spur lines. Note the run around on the spur leading to the port and mine to get the locomotive on the right end of the train, and a locomotive escape on the end of the pair of tracks next to the port. Freight cars will also be dispatched to and from the yard. There is a service area to the right of the yard with a locomotive fuel and service siding, a round house and two car service tracks/buildings on the right side of the middle island. Everything to make an operational railroad rather than just trains running around in circles.”

Bill also created several whole American N-scale trains, using figures in SCARM with all possible details that can be achieved in the program and full coloring. See some of them below. 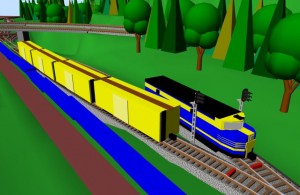 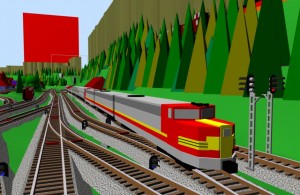 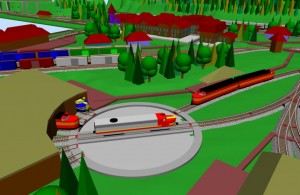 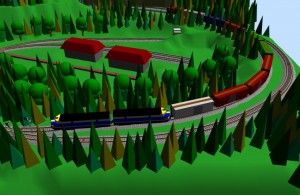 “The passenger cars where built to scale using measurements from one of cars. Figuring out the “layers” took some time and several tries. Colors and thickness of each layer took some practice. One is using the Southern Pacific Daylight colors, the other Santa Fe. Doing the locomotives got a bit tricky, especially the Santa Fe. Multiple layers to get the red and yellow where I wanted them. I based the locomotives on the Alco PA type.”

Bill is sharing a dedicated project files from where these trains and even more can be copied and used in every other N-scale SCARM plan – the presentation of them will follow in separate article.

Here are a few more 3D views from Bill’s layout. 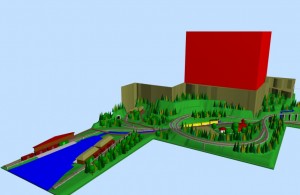 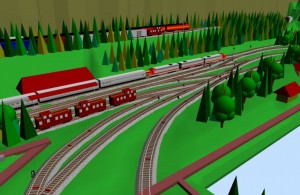 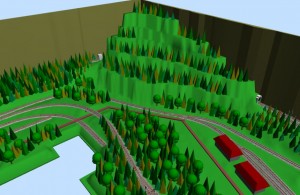 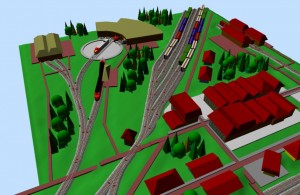 Note how many trees are placed in the scenery. Because SCARM is still not optimized for large layouts with so many details, using of the fir-trees, provided in “Trees” object library can slow down the program and even cause it to freeze. To cope with this, Bill found a perfect solution – dummy roofs, colored in green. Simple, but still useful and good looking.

And here are the final words of Bill:

“I consider myself to be a journeyman level model railroader on the way to being a professional/tradesman level. With SCARM I will be able to achieve that. Careful planning and design will keep the headaches and problems to a minimum and, with a layout of this size they are to be expected. Your program has allowed me to take an idea, bring it to life, see everything in 3D, and plan down to the last detail. Once I got past the learning curve it has been a lot of fun. Thank you for creating SCARM. I will be sharing it with all the other model railroaders I know.”

Thank you, Bill, for sharing your SCARM layout plan and train models with all other model railroaders and SCARM users

3 thoughts on “The N-scale Garage Layout of Sarge”